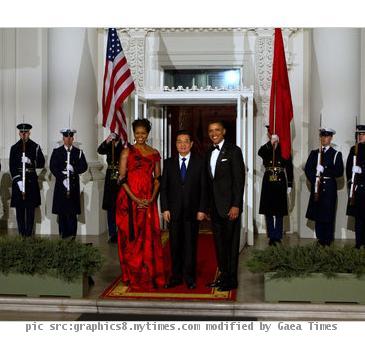 WASHINGTON (GaeaTimes.com)- United States President Barack Obama and First lady Michelle Obama were host to a gala state dinner last night that was held in White House in honor of Chinese President Hu Jintao. As many as 225 guests turned up for the event which included the who’s who from the world of politics, business as well as entertainment. Adorning a black tuxedo, the U.S. president welcomed his Chinese counterpart at the North Portico of the White House accompanied by First lady Michelle Obama. The state dinner that was held on Wednesday night was the first one to be held for a Chinese leader in the last 13 years.

As the 225 guests swept across the White House at the state dinner in honor of Chinese President Hu Jintao, the two leader raised a toast calling for peace and unity between the two nations. While President Barack Obama hailed the people of both the countries, his Chinese counterpart raised the toast to a “steady growth of China-U.S. relations” as well as “stronger friendship between the people of China and the United States.” Keeping in mind the request made the Chinese delegation, a ‘quintessentially American’ evening was organized by the White House officials comprising of a menu that has Maine lobster and dry-aged rib-eye as the specialties.

BHOPAL - The central government has awarded Madhya Pradesh for the best implementation of Forest Rig...