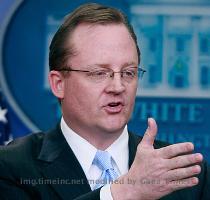 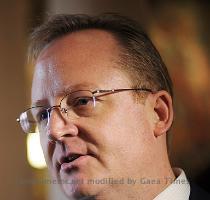 WASHINGTON (GaeaTimes.com)- Robert Gibbs announced at the press conference on Wednesday that he is leaving his post at the White House Press Secretary. The former communications director said that he feels now it is time for him to take a break and spend some time with his family and his seven year old son. The White House officials has not announced any replacement of Robert Gibbs yet. On the other hand, President Barack Obama told that he would announce the names of his members in the Economic team on Friday.

Robert Gibbs addressed the White House officials on Wednesday and said that his job as the Press Secretary of the Obama Administration was his “opportunity of a lifetime” and he would always be grateful to President Barack Obama for it. He said stepping down from his post was not an easy decision for him, however, over a period of time he made the decision to resign from his post. He said that his years in White House had been hectic as the officials there hardly get any holidays and it is a “tough place” to work in.

However, Robert Gibbs told that working in Whiter House had been an “amazing privilege” of his life and he would never exchange the worst days of White House with any other jobs of the world. President Barack Obama released a statement after the Press Secretary announced his departure from White House. In his statement, the President called Robert Gibbs as his close friend, his effective advocate and also one of his closest advisers. However, he said that it was somehow natural for Robert Gibbs to take the decision of stepping back from his post, “reflect and retool”.

CANBERRA - The Australian Government wants to know what more can be done to stamp out the practice...

George Clooney may star in 'The Man From U.N.C.L.E'

LONDON - George Clooney is reportedly in talks to play Napoleon Solo in a big screen adaptation of '...

Facebook-addict crooks make it easier for US cops

NEW YORK - Criminals in the US are bragging about their murders, rapes and robberies on social netwo...

Stem cell therapy could 'help the blind see within 6 weeks'

1 in 5 Brits think Oliver Twist was written by Charles Darwin!

LONDON - A revolutionary technique that could restore sight to the blind and prevent others from los...
Copyright© 2011 The Gaea Times