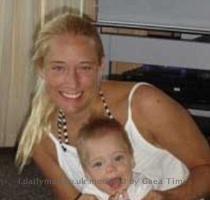 WASHINGTON (GaeaTimes.com)- Neighbors watched with concern as fire department rescue workers tried to extinguish the flames of Ashley Turton’s car inside the garage of her Washington residence. Police on Monday morning found the remains of Ashley Turton, the wife of a crucial White House aide. The death news has stunned the entire Capitol Hill neighborhood as people had no clue how the fire broke out.

37-year-old Ashley Turton’s body was badly burnt due to the flames that had engulfed her BMW sports car. Dan Turton’s wife herself was a top Congressional staffer turned lobbyist who lived in her Capitol Hill residence with her 43-year-old husband and their three kids. Police arrived on the spot after the fire had caught the attention of the neighbors who called for emergency. The incident took place in the early hours of Monday morning and police had reached the site by 5 a.m. It is not clear whether Ashley Turton’s death is a case of an obvious accident or was there any motive of crime behind it. According to Pete Piringer, a fire department official, the death of the Democratic loyalist will be jointly investigated by the police and fire department.

Police, however, has not yet mentioned any thing that might indicate that someone deliberately caused the incident which led to the tragic death of Ashley Turton. It was clear that the car had crashed through the garage doors but details about the incident remains sketchy. The fire had not only damaged the vehicle badly but had also caused harm to some parts of the brick walled house.

Cheryl Cole 'to quit X Factor to focus on music'

LONDON - Rumours are abuzz that Cheryl Cole is on the verge of quitting 'The X Factor' to concentra...

LONDON - A British diplomat has sparked fury after claiming that Kabul is a safer place for children...

LONAVALA - She wore a sari, bindi, jhumkas and bangles, danced to Bollywood numbers and even grasped...

Kesha says no to 'Nazi' dancewear

MELBOURNE - 'Tik Tok' girl Kesha said no to the militaristic emblems on the outfits of her X ...

WASHINGTON - A new documentary named "Client Nine: The Rise and Fall of Eliot Spitzer" by Oscar-wi...

After 15 years, I binged on junk food for 'Guzaarish': Hrithik Roshan (Interview)

MUMBAI - Hrithik Roshan, known as a hot bod of Indian showbiz for whom staying away from junk food i...

Backing for India's UNSC seat 'speaks volumes of how US thinks about India': Experts

LONDON - An English electric appliance bought six decade ago by a family is now believed to be the o...
Copyright© 2011 The Gaea Times