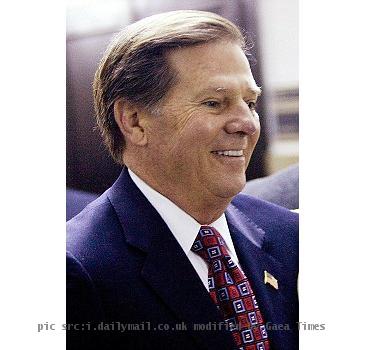 AUSTIN (GaeaTimes.com)- Former member of U. S. House of Representatives, Tom DeLay has been sentenced to three years in prison on conspiracy charges for illegally laundering money to Texas candidates in the year 2002. Tom DeLay was convicted with charges of money laundering back in November and on Monday, Judge Pat Priest of San Antonio gave him the prison sentence. Judge Pat Priest has also gave the former Representative ten years probation on the charges of money laundering.

Tom DeLay, one of the most powerful and prominent Republicans was convicted in November for illegally transferring corporate money ($190,000) to help the Republican Party during 2002 elections. The investigators said that Tom DeLay conspired with two other associates John Colyandro and Jim Ellis to use the money for political purposes. However, Texas law does not approve use of corporate money in political campaigns. The prosecutors previously said that Tom DeLay could have received life in prison owing to the conspiracy and money laundering charges. The onlookers said that the former Congressman somehow looked unrepentant in the courtroom. He told the judge that he fought his own fight and in the end kept his own faith.

Tom DeLay also said that he would not be sad for something which he never did. However, his lawyer, Dick DeGuerin, reportedly, told a media source that Tom DeLay would appeal once again. The media outlets reported that Tom DeLay was later released on $10,000 bond. After he was convicted last year, Tom DeLay, in one of his interviews said that it was a “miscarriage of justice” while adding that he is “innocent” and has not committed any crime.

WASHINGTON - Astronomers at ASTRON demonstrated the feasibility of a new receiver technology by simu...

LONDON - Prince Charles recently broke the Royal protocol by signing an autograph for a flood-hit ...

PANAJI - Sure Tom Cruise played a flashy but endearing bartender in the 1980s Hollywood film "Cockta...

NEW YORK - American fashion designer Tom Ford has chosen to pose with a 15-year-old model on the c...

LOS ANGELES (GaeaTimes.com) -- If the rumors are considered to be correct, Tom Cruise and his be...

Accents are a real turn-off for Scottish listeners

LONDON - If you don't sound like the Scots, you are likely to turn them off as a new study has ...

LONDON - Playboy magazine is all set to auction off some of its most well known images featuring som...

Tom and his girlfriend, Sally, are celebrating their three year anniversary. They are going for a we...
Copyright© 2011 The Gaea Times