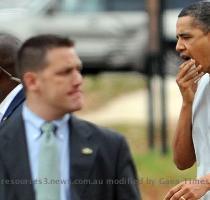 WASHINGTON DC (GaeaTimes.com) There was some controversy surrounding as to who was the man responsible for the 44th President of the United States of America’s lip injury on Friday morning, until Rey Decerega broke out the news on Friday afternoon. Rey Decerega who is the director of programs for the Congressional Hispanic Caucus Institute, himself admitted of being responsible for the President’s lip injury.

Until the news came from the man himself, nothing could be guessed about it, since the White House officials were strictly tight-lipped about the issue, refusing to name the person who was responsible for the act. Rey Decerega issued a statement out on Friday afternoon, declaring that he had hit the President accidentally during a basketball game which was going on in Fort McNair, which is a military base in Washington DC, on Friday morning. The game was a friendly one, which saw the President in high spirits as he had fully geared himself up on the basketball court along with his family and friends. Jonathan Smith, a sports fitness instructor at Fort McNair was seen telling a reputed news channel that the accident took place 90 minutes past the game. It is noteworthy that although Rey Decerega admitted himself of being responsible, but he did not apologize. He added that he had accidentally hit his elbow to the President’s lip when the latter was playing defense.

Rey Decerega said that it was today that he learned of how good Barack Obama was in sports and how tough competition he could give to his fellows. Reportedly, the lip injury happened in the upper lip. Other than Rey Decerega, Barack Obama’s personal assistant Reggie Love, Education Secretary Arne Duncan and Barack Obama’s nephew Avery Robinson were also part of the game.

WASHINGTON - A study has suggested that using social networking sites like Twitter as a tool in univ...

MADRID - Real Madrid kept the top spot in the Spanish league with a 2-0 home defeat of luckless neig...

LOS ANGELES (GaeaTimes.com) -- The results of WWE Bragging Rights 2010 and the video replay are ...

HYDERABAD, INDIA (GaeaTimes.com) -- Do you know Dharma Teja? If not, I wanna take the pleasure o...

Is that Jay-Z? 'Gangsters' in Miami police web banner bear resemblance to the hip-hop star

MINNEAPOLIS (GaeaTimes.com)- The manner in which this year's Twin Cities Marathon unfolded on Su...
Copyright© 2010 The Gaea Times