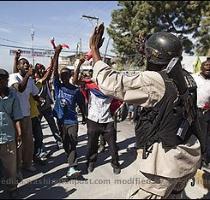 PORT-AU-PRINCE (GaeaTimes.com)- The Haiti election results have been declared as a runoff by the Election Commission. Ever since the news came the streets of the capital city of Port-Au-Prince have been burning endlessly. Yes the streets are filled with barricades which are in flames and supporters of Mirlande Manigat are throwing stones at the passers by. The Presidential election that was held about a week ago has former first lady Mirlande Manigat with 31.37 votes, with Jude Celestin in the second position with 22.48 percent and in the third position is popular musician Michel Martelly with 21.84 percent.

Supporters of Mirlande Manigat are refusing to accept this verdict and are claiming that all this is a deliberate attempt on the part of the current President Rene Preval to stop Mirlande Manigat from becoming the President of Haiti. An agitated protester said that the government has to give either Mirlande Manigat or Michel Martelly else the country will be on fire. The post election results scene out there is police patrolling the streets without much success since people fuming at the recent declaration are almost unstoppable.

The polls will once again take place on January, four days after the first anniversary of the devastating earthquake. On January 16, the election results will come to say who will be the next President of Haiti. There are speculations going on that President Rene Preval who is backing up Jude Celestin is desperate to make him the winner. Of late Rene Preval’ government has been on the edge of unpopularity which is a root cause for all these violent protests. The nation is likely to be in this state of unrest until the next election results come out.

LONDON - After his failed bid to run for president of Haiti, rapper Wyclef Jean has expressed his di...

NEVADA - Hindu statesman Rajan Zed has appealed to the international community to help Haiti in ...

GENEVA/WASHINGTON - A cholera epidemic sweeping across Haiti has killed more than 800 people, hospit...

Haiti cholera toll goes up to 724

Tyra Banks to auction her dress for charity

LONDON - Talk show host Tyra Banks and a number of top models will be donating their dresses to char...