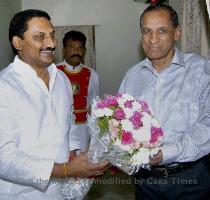 HYDERABAD, INDIA (GaeaTimes.com)- The new ministry of Andhra Pradesh took over the charge of the state on Wednesday at Raj Bhavan in Hyderabad. Chief Minister N Kiran Kumar Reddy has sworn with his team of 39 AP cabinet members.

As expected by many people resigned leader YS Jaganmohan Reddy’s uncle, YS Vivekananda, is now part of the new AP cabinet. Out of the 39 new members in the cabinet, 10 are new faces. Kiran Kumar Reddy has refused to include all those people who are loyal to YS Jagan, who resigned from Congress and the Kadapa MP post on Monday. the members whom the new chief minister refused to include in the AP Cabinet are Balineni Srinivasa Reddy, Pilli Subhash Chandra Bose and P R Reddy from Chittoor district. However, although he announced his cabinet members, he did not announce who would be the deputy CM under his reign.

Mozilla as an open source alternative to the big guns of Microsoft and Apple has grown leaps and...

3 Gadgets to Buy this Black Friday

Black Friday signals the onset of shopping spree for Christmas Day and here we have made a list ...

SYDNEY - A whopping 97 percent of Australian adults under the age of 30 say social networking websit...

MONTREAL, CANADA (GaeaTimes.com)- There is great news for all the foodies out there in Montreal a...

NEW DELHI - India and Bangladesh have agreed to work constructively towards resolving all d...

WASHINGTON - Scientists have shed light on the explosion of plasma clouds on the Sun. The Sun sp...
Copyright© 2010 The Gaea Times