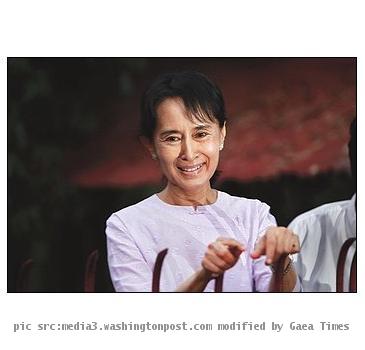 YANGON, MYANMAR (GaeaTimes.com)- After 15 years of detention, Burmese opposition politician Aung San Suu Kyi has been released on Saturday. The supporters of former General Secretary of the National League for Democracy thronged in front of her home to see one of the most prominent leaders of Myanmar. Aung San Suu Kyi has been placed under house arrest on many occasion, totaling 15 of the past 21 years, since she began her political career.

After she was released from her house arrest, Aung San Suu Kyi addressed the crowd and thanked everyone for their love and support. She said that the citizens should work together in “unison” and she is glad that everybody is welcoming her and supporting her. However, she added that people should not stay quiet when the right time comes. She addressed the crowd and said that would do her best for the “national reconciliation” and she hopes that people would support her. While speaking about her detention, Aung San Suu Kyi said that the officials have treated her well on a personal level but they have not acted in accordance with the “rule of law”.

Aung San Suu Kyi said that she feels no country can prosper or shine without a definite rule of law. The Congress party in India welcomed the release of Aung San Suu Kyi and released a statement where it was stated that the party recalls her effort for “democratic rights” and also acknowledges her symbol of “resistance”, human rights and freedom. It also stated that Indian National Congress remembers Aung San Suu Kyi’s stay with her mother and father in India during her formative years.