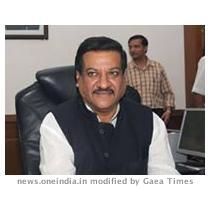 MUMBAI, INDIA (GaeaTimes.com)- On Wednesday morning, Pranab Mukherjee announced the new Chief Minister of Maharashtra as Prithviraj Chavan. The selection of Prithviraj Chavan comes as no surprise to the media as the news had broken out long ago that he is the most likely candidate for the post vacated by the Adarsh Housing scam tainted Ashok Chavan.

Pranab Mukherjee addressed the media today morning and said that congress chief Sonia Gandhi had chosen Prithviraj Chavan as the chief minister of Maharashtra and the Maharashtra Congress Legislative Party backed the move. It was the Maharashtra CLP which had in fact authorized Sonia Gandhi to choose the next CM yesterday. Presently Prithviraj Chavan serves as the Minister of State for the ministries of Ministry of Earth Sciences, Ministry of Personnel, Public Grievances and Pensions, and Ministry of Parliamentary Affairs at the center. He also overlooks the Indo-US nuclear deal

Working with the center over the years, Prithviraj Chavan is known to be completely out of touch with the politics at the state level. Reports suggest that this could work to the advantage of the center as there would be less chances of factionalism with him in Maharashtra. He will also be relieved from his work at the center which will in turn call for a cabinet reshuffle. The people of the state are looking at the newly appointed CM with great hope as his predecessor disappointed many by being a part of the Adarsh Housing Society scam. Ashok Chavan resigned after the center asked for a clarification from him about his mother in law and other relatives turned out to be members of the housing society that was built for war veterans and widows of the heroes who died in the Kargil war.