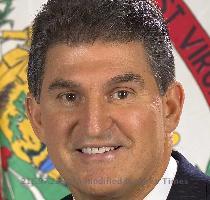 CHARLESTON, (GaeaTimes.com)- It was a great day for the Democrat supporters of West Virginia, as the 63 year old West Virginian governor, Joe Manchin defeated Republican John Raese and made his way to the Senate through the US Senate Special Election in West Virginia. Reports say that Joe Manchin bagged 53 percent of the votes, while John Rease got 44 percent, a difference that counted to about 50,000 votes.

Joe Manchin arrived at the Marriott in downtown Charleston late Tuesday, with all other Democrats, to give his victory speech. The celebration of his victory opened with a slide show, that rolled the pictures of Late Senator Robert C. Byrd, whose office was taken by Joe Manchin on July 20, 2010, after the formers death. The slide show then rolled the pictures of Joe Manchin himself. He said in his victory speech that as a state, West Virginia has made tremendous strides, and he would continue to fight for the betterment of West Virginia every day from now on. He also said that he would not be just a blind and rigid Democrat, but would rather everyone who puts the country first. He would merge the positive aspects of all the parties for the sake of his state. His victory was initially not anticipated, as the fore running elections were very much in favor of his Republican opponent John Rease. But as the election day arrived, altered his campaign strategy, by apparently moving away from the typical agenda of the other Democrats, and focusing on his ‘independent voice’, which emerged him the winner at the end.

Joe Manchin was not available for any press interview after his victory. However, his campaign spokesman Lara Ramsburg said that he would join the Senate by the mid of November when the election results are certified. He would start the logistics of the move from Wednesday.