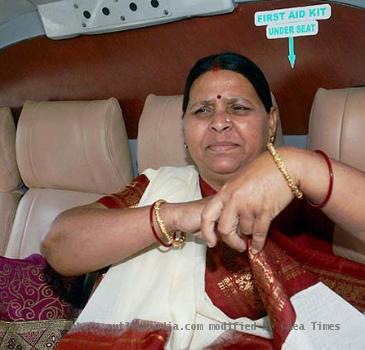 PATNA, INDIA (GaeaTimes.com)- The Bihar Polls has brought debacle for RJD leader and ace politician Lalu Prasad Yadav. The stellar performance of JD(U)-BJP alliance has overshadowed the efforts of the veteran political leader who tried his level best to reclaim his lost glory. The RJD-LJP alliance has been trounced in the Bihar polls as is evident from the latest reports. The alliance has performed so poorly that it has not got even half the seats they had got in the 2005 elections. As if it is not enough the wife of Lalu Prasad Yadav, namely Rabri Devi who also used to be a CM of Bihar has lost from Raghopur constituency. She was defeated by her opponent Satish Kumar a JD(U) candidate.

The latest reports suggest that Rabri Devi is also lagging behind her opponent in the second seat she contested from- Sonepur. BJP’s Vijay Kumar Singh is leading in that seat as reports have poured in. This indicates the possible result of the Bihar assembly election. This may make things easier For Nitish Kumar who may emerge triumphant after the polls.

Apart from Rabri Devi some major RJD candidates have also lost from their seats in Bihar and the result has strengthened the morale of ruling National Democratic Alliance. So far the NDA and allies are leading in 158 of the 215 seats. Congress has done a poor show by leading in just 5 seats. The defeat of Rabri Devi has come as a setback for the RJD LJP alliance and it remains to be seen how her veteran politician spouse explains his rout in elections.