US President Barack Obama’s Mesmerizing Speech at the Taj Hotel 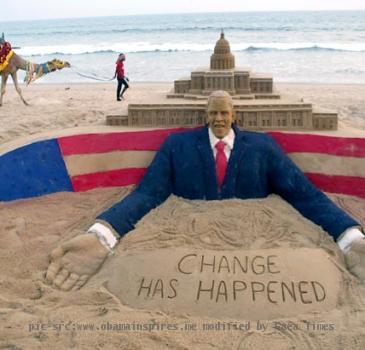 US President Barack Obama’s gave an astonishing speech at the Taj Hotel terrace at about 2:25 pm. The excerpts from the speech are quoted below. It seems the US President has received a really warm and heartfelt welcome from our nation and is quite happy to share his thoughts with us all.

On behalf of Michelle and myself, I want to say what an extraordinary honor it is to be here in India. I want to thank the people of Mumbai and all of you here today for your extraordinarily warm welcome. And I want to say to the people of India how much we are looking forward to spending the next three days in this remarkable country and to deepening the partnership between our two countries.

I know there’s been a great deal of commentary on our decision to begin our visit here in this dynamic city, at this historic hotel. And to those who have asked whether this is intended to send a message, my answer is simply, absolutely. Mumbai is a symbol of the incredible energy and optimism that defines India in the 21st century. And ever since those horrific days two years ago, the Taj has been the symbol of the strength and the resilience of the Indian people.

So, yes, we visit here to send a very clear message that in our determination to give our people a future of security and prosperity, the United States and India stand united.

A few moments ago, Michelle and I had the opportunity to visit the memorial here and to honor the memory of those who were lost. And we also had the privilege of meeting with some of their families, as well as some of the courageous survivors. I thank them all for joining us here today, along with so many others who endured the anguish of those four days in November.

But the resolve and the resilience of the Indian people during those attacks stood in stark contrast to the savagery of the terrorists. The murderers came to kill innocent civilians that day. But those of you here risked everything to save human live.

You were strangers who helped strangers; hostages who worked together to break free and escape; hotel staff who stayed behind to escort guests to safety; including the hotel manager, even after he lost his own family; a nanny who braved the bullets to protect a young boy; and Indians in uniform who stopped the carnage and whose colleagues made the ultimate sacrifice.

The perpetrators wanted to pit believers of different faiths against one another. But they failed. Because here in Mumbai, the diversity that is India’s strength was on full display: Hindus, Sikhs, Christians, Jews and Muslims protecting each other, saving each other, living the common truth of all the world’s great religions, that we are all children of God.

Those who attacked Mumbai wanted to demoralize this city and this country. But they failed. Because the very next day, Mumbaikars came back to work. Hotel staff reported for their shifts. Workers returned to their businesses. And within weeks, this hotel was once again welcoming guests from around the world.

By striking the places where our countries and people come together, those who perpetrated these horrific attacks hoped to drive us apart. But just as Indian citizens lost their lives on 9/11, American citizens lost their lives here on 26/11 — along with the citizens of many nations. And just as our people prayed together at candlelight vigils, our governments have worked closer than ever, sharing intelligence, preventing more attacks, and demanding that the perpetrators be brought to justice.

Indeed, today, the United States and India are working together more closely than ever to keep our people safe. And I look forward to deepening our counterterrorism cooperation even further when I meet with Prime Minister Singh in New Delhi.

We go forward with confidence, knowing that history is on our side. Because those who target the innocent, they offer nothing but death and destruction. What we seek to build — to welcome people of different faiths and backgrounds, and to offer our citizens a future of dignity and opportunity. That is the spirit of the gateway behind us, which in its architecture reflects all the beauty and strength of different faiths and traditions, and which has welcomed people to this city for a century.

That is the hope that in towns and villages across India, across this vast nation, leads people to board crowded trains and set out to forge their futures in this city of dreams. And that is the shared determination of India and the United States — two partners that will never waver in our defense of our people or the democratic values that we share.

For just as your first Prime Minister said the day that the father of your nation was taken from you, we shall never allow that torch of freedom to be blown out, however high the wind or stormy the tempest. We believe that in America, and we know you believe it here in India.

God bless you, and thank you very much.