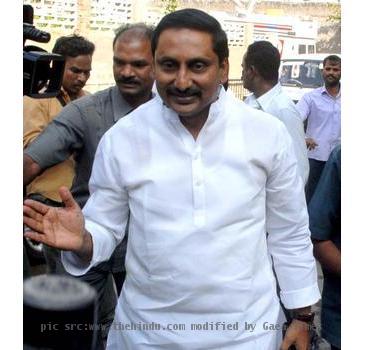 HYDERABAD, INDIA (GaeaTimes.com)- On Thursday, N. Kiran Kumar Reddy was sworn-in as the new Chief Minister of the state of Andhra Pradesh. The Congress leader was announced as the new Andhra Pradesh CM after K Rosaiah gave his resignation the previous day. With the swearing-in ceremony that was held in Raj Bhavan, N. Kiran Kumar Reddy assumed responsibilities as the 16th Chief Minister of the state of Andhra Pradesh. The 50-year-old leader took the oath in Telugu and it was administered by Governor E. S. L. Narasimhan in a brief and simple function on Thursday afternoon which was attended by a number of prominent political leaders.

The dignitaries who were present at the swearing-in ceremony of N. Kiran Kumar Reddy included Union Law Minister Veerappa Moily, state Congress chief D. Srinivas, Union Health Minister Ghulam Nabi Azad as well as a host of senior bureaucrats. Many leaders of the out-going Chief Minister K Rosaiah’s cabinet also graced the function that was held in the lawn of the Raj Bhavan in the capital of Hyderabad. The sudden change-of-guard in Andhra Pradesh not only came as a bolt from the blue in the political circles, it took Congress leader N. Kiran Kumar Reddy also by surprise. Sources close to party-high command have revealed to the media that the new Andhra Pradesh C.M would be going to New Delhi to meet the senior Congress leaders either today or tomorrow.

While talking to reporters later, N. Kiran Kumar Reddy stated that there were many hurdles in front of him that he needed to overcame but expressed hope that with the help of the legislators and his party members, he would be able to do so.

How airborne influenza may spread