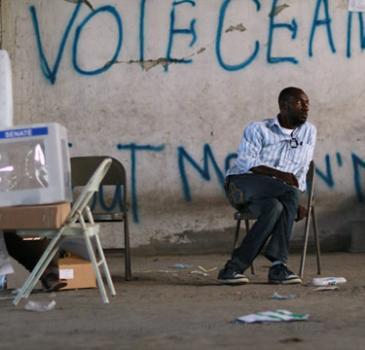 PORT-AU-PRINCE (GaeaTimes.com)- Much anticipated election of 2010 at Haiti ended on Sunday but within the hours of its successful ending, the candidates demanded a re-election calling it to a “massive fraud”. The candidates claimed that President Rene Preval tried his best to steal the election and choose his best candidate Jude Celestin for the post. Pierre Opont, the director of Haiti’s main electoral body, however, told a reputed media source that the election was successfully concluded.

However, Pierre Opont also said that out of 1,500 centers, 56 of them reported incidents in which one person even died. On the other hand, hours before the announcement of successful completion of Haiti Elections two-thirds of the candidates denounced the vote and at the same time called for a re-election owing to the ballot-box stuffing and irregularities in the election. Mirlande Manigat, the lead candidate of the Haiti Elections 2010 has asked the Conseil Electoral Provisoire, citizens of the country, the government and also the international community to cancel the elections. At the same time, Wimine St. Pierre, the spokesperson of Mirlande Manigat has told in a press conference that the leading candidate is asking to void the election across the country as the votes were already given to Jude Celestin.

LONDON - After his failed bid to run for president of Haiti, rapper Wyclef Jean has expressed his di...

NEVADA - Hindu statesman Rajan Zed has appealed to the international community to help Haiti in ...

GENEVA/WASHINGTON - A cholera epidemic sweeping across Haiti has killed more than 800 people, hospit...

Haiti cholera toll goes up to 724

Tyra Banks to auction her dress for charity

LONDON - Talk show host Tyra Banks and a number of top models will be donating their dresses to char...