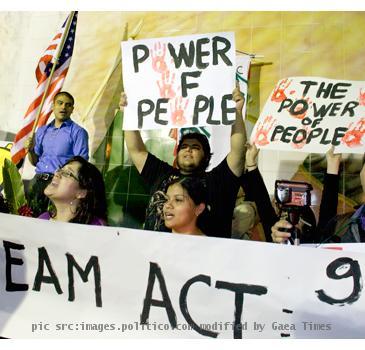 WASHINGTON (GaeaTimes.com) — The DREAM Act Bill will allow immigrants citizenship of US — the ones who came in as children. According to many, those people were innocent enough to have understood the law when they came to the country and thus should be offered a chance.

But, Thursday Senate Democrats conceded the fact that the bill might not be sanctioned as it is falling short of votes. The DREAM Act Bill remains to be one of the most hotly contested bills of the year and will end reportedly in January next year.

Senate Republicans opposed the bill saying that they want an answer to the extension of the Bush tax cuts and fund the government first.

Press Secretary Robert Gibbs said the proposal “should get bipartisan support in the Senate as well, and in light of the vote in the House, this is the right way to move forward to get that.”

Rep. Luis Gutierrez, D-Illinois, a major supporter of the DREAM Act, said Thursday that “we now have the weekend and into next week to launch a national mobilization to get the votes to enact this important bill.”

Do You Think that India can Fulfill the Dream of 240 mn Broadband Users by 2015?

Meet the Russian woman who paints with her 40E breasts!

LONDON - Amateur artist Victoria Romanova has come up with a novel way to paint - using her 40E brea...

Mosquito repellent to virtual inverter, innovations awarded at I3

NEW DELHI - For 48-year-old Anjan Mukherjee, a herbal products businessman in Kolkata, coming to the...

LOS ANGELES - Actor Daniel Day-Lewis has been roped in to play the 16th American president, Abraham ...
Copyright© 2010 The Gaea Times