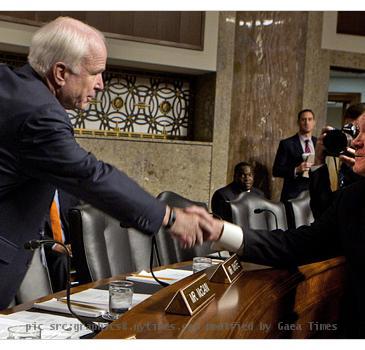 He spoke on the grounds of a survey conducted on 115,000 active duty and reserve service members. The results of the same clearly depicted that a majority of 58 percent of Marines in combat units and 48 percent of Army thought that repealing this law that have been there for none less than 17 long years would either prove to be negative or may pop up with some uncanny impact, leading to a situation in which they might not be able to work together properly.

I remain concerned, as I have in the past, and as demonstrated in this study, that the closer we get to service members in combat, the more we encounter concerns about whether ‘don’t ask, don’t tell’ should be repealed, These views should not be considered lightly, especially considering how much combat our forces face.

In a controversial debate, Mr. Gates was found telling,

With time and adequate preparation, we can mitigate their concerns.

and McCain, who himself had been a naval aviator in the Vietnam War and was shot down and imprisoned in Hanoi shot back at him with,

Post this debate the decision to vote for within the next few weeks was confirmed once again by Admiral Mullen who explained that delay will only draw in waves of lawsuits.

LONDON - George W. Bush's "Decision Points" was billed as offering "gripping" account of his time in...

LONDON - Former US President George W Bush has been accused of 'literary swiping' sections of his me...

LOS ANGELES - It's unclear exactly who coined that famous phrase "politics is show business for ugly...

Backing for India's UNSC seat 'speaks volumes of how US thinks about India': Experts

National security key to Obama's chances of getting re-elected in 2012: Top Republican

WASHINGTON - US President Barack Obama has a good chance of being re-elected in 2012 provided he m...

'Bush thinks Palin not fit to be President

WASHINGTON - Former US President George Bush believes that Sarah Palin is not qualified to be presid...
Copyright© 2010 The Gaea Times