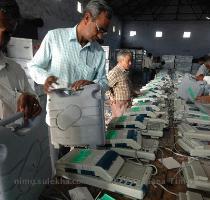 ANDHRA PRADESH, INDIA (GaeaTimes.com) — It seems that TRS (Telengana Rashtra Samiti) are moving towards a grand victory in Andhra Pradesh election. Till now, Harish Rao of TRS has won by 95,858 votes in Siddipet assembly with Congress following on the second position. TRS again leads with 7,569 votes in the assembly of Warangal West for the first round.

BJP has won the Nizamabad Urban assembly with 11,384 votes while TRS has managed to hold onto their earlier seats at Mancherial, Sirpur and Chennur with 52,452 15,214 40, 817 votes respectively. TRS is also leading the first round in Yellareddy with 3,104 votes, followed by Congress and TDP.

At Karimnagar district, TRS leads all over with the Huzurabad assembly with 600 votes and at Sircilla with 7,100 votes. In Vemulawada, TRS won with 50,443 votes while leading the first round in Koratla with 6, 500 votes followed by Congress. In Dharmapuri also TRS won by 58,836 votes followed again by Congress and TDP.

The complete results will be out after the counting has been completed. Keep following us for more updates.