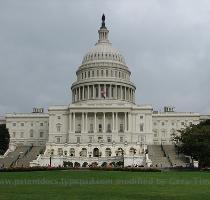 WASHINGTON (GaeaTimes.com)- The U.S. House of Representatives on Tuesday night dismissed a bill claiming the extension of the powers of the 2001 Patriot Act and Intelligence Reform bill. The passing of the bill was denied after the voting failed to acquire a majority of two-third, as per the rules and regulations of the U.S. House of Representatives. The White House and a particular section of the Democrats are favoring an extension of the powers Patriot Act, on the basis that it would provide a better security to the country.

Sources revealed that there was a total of 425 voters, out of which 277 voted in favor of the extension of the Patriot Act and Intelligence Reform bill. Even though it was a majority compared to the 148 who went against the proposal, the proposed bill failed to gain an approval for it fell short of the two-third majority which would have been marked if it would have been able to reach 284. Interestingly, the passing of the bill was denied mainly by a section of Democrats who were at 122, while the rest 26 comprised of Republicans. Majority of the 26 Republicans were new House members.

The Patriot Act and Intelligence Reform will be getting expired in the next month, for which the White House and the particular segment of Democrats had wished for an extension which would give the law enforcement some additional surveillance power to tackle the serious issue of terrorism. If the proposed bill would have succeeded in gaining a majority then it would have added an extension to Patriot Act until December. Senate Democrats will be shooting a proposal for a legislation which would agree for the extension.

LISBON - NATO leaders have decided that the alliance should set up a system to shoot down ballistic ...

NEW DELHI - The Prime Minister, Dr Manmohan Singh, has condoled the passing away of noted Gandhian ...

MUMBAI - The marriage between Sara Khan and her beau Ali Merchant on "Bigg Boss 4" was nothing but "...