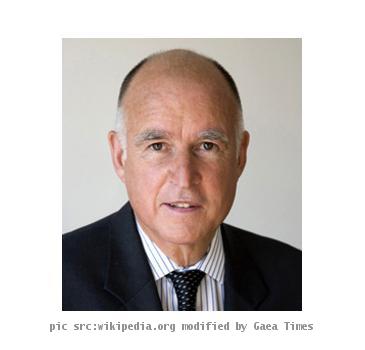 LOS ANGELES (GaeaTimes.com)- Jerry Brown is about to take the oath on Monday before executing his third term as the governor of California. The 100-day sprint will soon begin that would determine the future of the state and his potential as an administrator. The last time when he swore as the governor in 1975, he was a young 36 year old man. Since then things have changed a lot, and he has to face many more challenges.

The first challenge that Jerry Brown is expected to meet is the budget deficit of $28 billion, that has been bugging the Golden State for the last 18 months. He is on the verge of delivering his first speech to his people, and many of his supporters have speculated what might work best for the new governor, while he addresses to the people for the first time. Bill Whalen, a Stanford University researcher said that he has to prove that the voters have made the right choice. According to him, Jerry Brown’s first speech should be visionary, keeping the big picture in mind. President of the Public Policy Institute of California, Mark Baldassare, said that people are looking for the confidence out of his speech, that would either determine his success or his failure. Barbara O’Connor, a professor at the California State University said that his first speech should address and reach out to “his roots”.

The first 100 days as a governor, is often called the honeymoon period as it determines the quality of his administration for the rest of his tenure. Gov. Arnold Schwarzenegger, who preceded Jerry Brown had initially promised a lot of positive changes in the state’s administrative changes, but it never turned out to be strategically correct. Jerry Brown is expected to rectify his policies and make them work in favor of the state.

Melting glacial ice sheets 'may not raise sea levels after all'

LONDON - Glaciologists have been worried sick that the West Antarctic ice sheet will collapse ove...

NEW YORK - American fashion designer Tom Ford has chosen to pose with a 15-year-old model on the c...

WASHINGTON - Elderly people who take brain training sessions avoid the risk of car collision by half...

WASHINGTON - A new study has suggested that a protein superstructure-amyloid beta-is responsible for...

IRVING, (GaeaTimes,com)- Ever since Dallas Cowboy had a humiliating defeat to the Green Bay Pa...

LOUISVILLE (GaeaTimes.com)- It was a bad day for the most competent horse in Breeders Cup 2010...

OAKLAND (GaeaTimes.com)- Democrat candidate Jerry Brown salvaged some pride for his party in the...

WASHINGTON - Two years after his triumphal election as the first black leader of the US, President B...

LONDON - The iconic Aston Martin, driven by Sean Connery in two James Bond films, has been sold for ...
Copyright© 2011 The Gaea Times