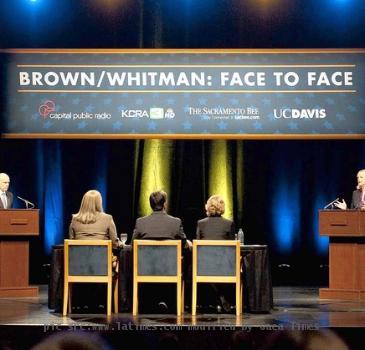 LOS ANGELES (Gaea Times.com) - The first debate between Jerry Brown and Meg Whitman took place on Tuesday but it wasn’t as fiery as few were expecting it to be. Meg Whitman though scored over Jerry Brown by maintaining her stand and seemed to have prepared herself well. Jerry Brown said that Meg Whitman was a novice and she will provide tax breaks to rich people like her who her millionaires and billionaires. Meg Whitman attacked Jerry Brown by saying that he was an out of date liberal who was bound to Unions and was soft on crime. The two provided the reasons for each of them being a better candidate with Jerry Brown suggesting that his long time experience would help him make the state government run in a better way with Meg Whitman claiming that the state would benefit from her as she is an outsider with a solid experience of having run a major corporation.

The two contestants Jerry Brown and Meg Whitman apart from clashing in the debate with each other did not delve deeply into the major problems that are plaguing California. There is a budget deficit of $19 billion and the economic problem being quite severe with the voters not in favor of an increase in taxes while wanting the government to keep spending on parks, education and healthcare.

Meg Whitman only answered a couple of questions after the debate and left saying that she was delighted with the way things went and will be looking forward to the second debate on Saturday. Jerry Brown simply refused to have an interaction with reporters after the debate.