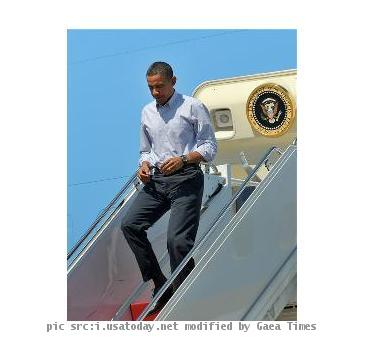 VINEYARD HAVEN (GaeaTimes.com)- United States President Barack Obama is all set to enjoy time with his family during a ten-day getaway in the holidaying destination of Martha’s Vineyard. The United States President arrived at the island on Thursday afternoon to spend quality time with his wife Michelle Obama and their two daughter’s Sasha and Malia. After President Barack Obama landed on the small airport of the island accompanied with his pet dog Bo, he greeted the large number of well-wishers who had gathered at the airport before making his way to the rented compound where he would be put up with his family.

Aides of the United States President have revealed that President Barack Obama is really looking forward to be with his family at the Martha’s Vineyard as he wants to ‘recharge his batteries’ after the rather exhausting beginning to the year which not only witnessed him gain the passage to the health care and the financial market overhauls but also saw a decrease in his poll numbers as the recovery of the economic status of the country plummeted.

Despite the fact that President Barack Obama has attracted the ire of his critics for vacationing for the second summer at the lavish Martha’s Vineyard, his aides have emphasized that the United States President truly deserves this break especially prior to the midterm elections that are scheduled to take place in the month of November. Given the fact that the U.S. president does not have any kind of political event lined up for the upcoming ten days, it would surely give him the rare opportunity to stay away from the media glare.