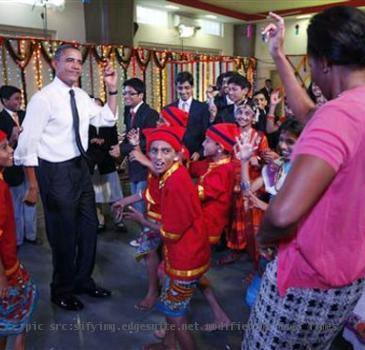 MUMBAI, INDIA (GaeaTimes.com)- For the students of the Holy Name School in Mumbai, the visit of the U.S. President Barack Obama accompanied by the first lady Michelle Obama turned out to be the experience of a lifetime. The kids of the school were busy preparing for the visit of the U.S. President in the last few weeks. The excitement of them and their parents were quite palpable prior to the president’s visit. However, for most of the students the excitement of course was mixed with a feeling of awe and hesitation. The experience of seeing and interacting with the President of USA made many of them intimidated as one can understand.

However, the students of the Holy Name School, Mumbai were in for a pleasant surprise. They never expected the U.S. president and his wife to be at their informal best. The president broke into a jig much to their astonishment and the warmth floored the students and teachers alike. The President also gave the students a patient hearing and watched the presentations they made on global warming and pollution. The first couple of the USA interacted with the school kids without any inhibition and they found it really heartwarming. They also posed for pictures with those kids.

A student of the Holy Name School, Mumbai said that for him as well as his class mates it was a golden opportunity to see and talk with President Barack Obama. Some of them were so involved with the tour of the President that they gave the Diwali celebrations a miss. They said that they did not regret missing the festivities this year.