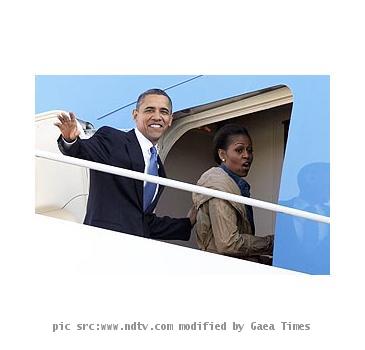 MUMBAI, INDIA (GaeaTimes.com)- United States President Barack Obama is all set to commence his trip to Asian countries on Saturday with Mumbai gearing up to be his first destination. After days of speculation, President Barack Obama finally landed in the Chhatrapati Shivaji International Airport at around 12:50 p.m on Saturday afternoon to kick off his India visit spanning across four days accompanied with his wife First lady Michelle Obama as well as many other U.S. top officials. The city of Mumbai is resembling a virtual fortress as authorities are keeping no stones unturned to ensure that President Barack Obama’s India visit takes place with any glitches.

According to sources, soon after he steps into the Indian soil from his U.S. Air Force One, President Barack Obama would board an American chopper which would take him to Indian Navy base helipad located in South Mumbai. During his trip to Mumbai, the United States President would be staying at the Taj Hotels, which was one of the targets of the 26/11 terrorist attacks that rocked the commercial capital of the nation. As per the schedule that has been made available to the media, during his India visit, President Barack Obama would head to the Taj Hotels first where he would be meeting some of the survivors of the 26/11 terror attacks. After this, the United States president would be escorted to Mani Bhavan, where Mahatma Gandhi had spent some of his time, followed by his visit to St. Xavier’s College premises in south Mumbai where he would be addressing students.

President Barack Obama’s visit to India as well as the other Asian nations is the longest foreign trip of the United States president since he assumed responsibilities of the office.