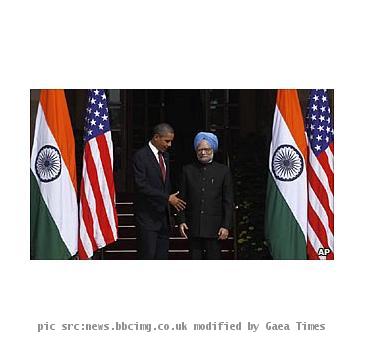 more images
NEW DELHI, INDIA (GaeaTimes.com)- On the third day of his official trip to India, United States President Barack Obama began talks with Prime Minister Manmohan Singh over a variety of bilateral as well as other matters. The U.S. President arrived in New Delhi on Sunday afternoon along with his wife First Lady Michelle Obama after his brief stay in Mumbai where he landed the previous day. On Monday, President Barack Obama was accorded the ceremonial welcome at the Rashtrapati Bhavan where he was greeted by Indian president Pratibha Patil and her husband Devisingh Patil.

Following the warm reception at the Rashtrapati Bhavan in New Delhi, President Barack Obama along with his wife Michelle Obama arrived at Mahatma Gandhi’s Samadhi at Rajghat where they paid floral tributes to the Father of the Nation. Just prior to his meeting with the Indian Prime Minister, the United States President described the partnerships between the two nations as the ‘defining partnership of the 21st century.’ President Barack Obama also went on to say that the main aim of his talks with the Indian leaders would be to give an impetus to the cooperation between the two countries as well as take note of matters such as “counter-terrorism and people to people contact.”