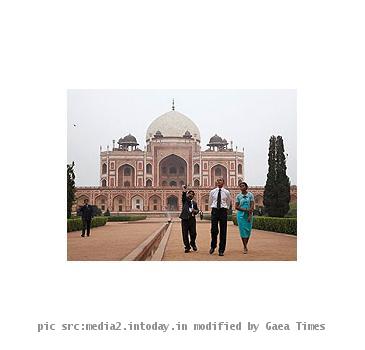 NEW DELHI, INDIA (GaeaTimes.com)- On his three-day visit to India, United States President Barack Obama made a stop at the World Heritage site Humayun’s Tomb on Sunday evening as a cultural part of his trip. The U.S. President visited the 16th century tomb of Mughal emperor Humayun along with his wife First Lady Michelle Obama which provided President Barack Obama with a glimpse of the rich cultural as well as historical civilization of the nation.

As the first couple of the United States made their way at the Humayun’s Tomb, their curiosity and eagerness looked similar to any other foreign tourists catching a glimpse of the marvelous Mughal monument for the very first time. However, the one factor that made them different from the rest of the foreign visitors was the large number of security officials present at the monument, turning it into a virtual fortress. As President Barack Obama arrived at the World heritage site, he was greeted by Gautam Sengupta, the Director-General of the Archeological Survey of India as well as a host of other top officials. As the U.S. President entered the 450-year-old structure, he seemed quite upbeat and said ‘Wonderful. Let’s take a look.’

As the U.S. first couple intently looked at the architectural splendor, ASI Superintendent Archaelogist K K Muhammad guided them through their trip to Humayun’s Tomb and informed them about the rich history of the Mughal monument situated in south Delhi’s Nizamuddin. At the World heritage site, President Barack Obama and his wife also meet with the workers involved in the renovation of the architectural marvel and also interacted with their kids.