Rahm Emanuel Ruled Out From Elections 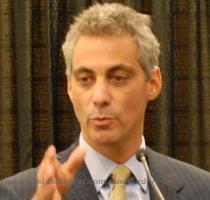 ILLINOIS (GaeaTimes.com)- Rahm Emanuel on Monday was barred by an Illinois appellate court to contest for the elections for the mayor of Chicago. The panel of judges has prohibited Rahm Emanuel from contesting in the elections of the mayor saying that he does not fulfill the criteria for the residency requirements that the office of the mayor demands. The law has taken the critical political issue of Rahm Emanuel’s residency blaming him that he spends most of the time in the power capital Washington. Hence law is raising questions of whether Rahm Emanuel is actually a Chicagoan or not?

Rahm Emanuel, however, has not bent down and instead of accepting the verdict has gone to fight against it. The Democrat has already filed for an appeal at the Illinois Supreme Court. According to the rules, four out of seven state Supreme Courts must hear his appeal. In a recent press conference the politician asserted that he is very confident that the final verdict will come out in his favor. On Monday the court held him out on a 2-to-1 vote to stand for the polls for mayor of Chicago. This was a severe shock for Rahm Emanuel who still remains a favorite amongst majority of the people for the position of the mayor which will soon be given away by Richard M. Daley.

Former White House chief of staff Rahm Emanuel says that he is confident that he will be allowed to participate in the forthcoming elections for the city’s mayor that will take place on February 22. His statements made his confidence conspicuous when he said that he will prevail.

WASHINGTON - Bobby Jindal, the Indian origin Governor of Louisiana, has used his new book to critic...

Chicago mayor's race casts shadow over state racesCHICAGO â The most telling sign yet of how th...

Jones resigns as NSC chief, Donilon next directorWASHINGTON â In another White House shake up, ...

Stumping in Illinois and Maryland, Obama aims to energize Dems to turn out for midterms

Obama tells Democrats in Maryland, Chicago he wants them just as fired up as they were in 2008

Obama to Maryland Democrats: 'I'm going to need you just as fired us as you were in 2008'