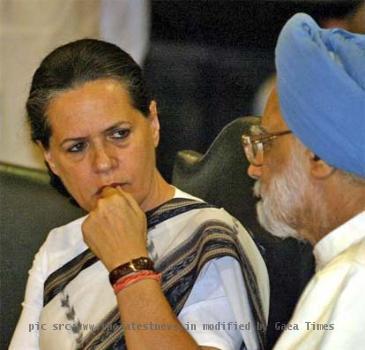 DELHI, INDIA (GaeaTimes.com)- The ruling UPA government led by Prime Minister Manmohan Singh is going to witness its first cabinet reshuffle post its win in 2009. The change is meant for revamping the image of the government which is massively hit by a number of scams and poor performance of existing ministers that are being used as weapons by the opposition parties. The PM along with Congress Supremo Sonia Gandhi finalized the changes yesterday and sources close to the PM said that the change can be more expansive than what was expected earlier. The inputs also suggest that the ministers who performed consistently in the last few months will be awarded while those who demonstrated shoddy performance will be axed.

The cabinet reshuffle is not likely to affect Defence Minister AK Antony, Finance Minister Pranab Mukherjee, Foreign Minister SM Krishna and Home Minister P Chidambaram. These 4 ministers are expected to retain their current portfolio. The axe may come on Sports Minister MS Gill who got brickbats from all circles for the mess known as the Commonwealth Games. CP Joshi may also be removed from Rural Development Ministry and Veerappa Moily may have to give up the Law Ministry. The surface transport ministry may be given to a new minister which will leave Kamal Nath in the lurch.

The UPA allies including TMK may see some of their candidates in charge of the new and reshuffled union cabinet. The changes will become evident soon. The UPA is wary of the constant tirade of the opposition parties who are targeting the government for its poor performance in inflation control and price rise of essential commodities.

LONDON - Tens of thousands of foreign students, including those hailing from India, may be barred fr...

NEW DELHI - The winter session of Delhi Assembly from Tuesday is all set to be a stormy affair with ...

Yeddyurappa, the man who can dent BJP hold in Karnataka