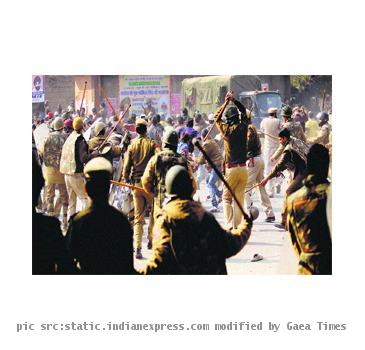 NEW DELHI, INDIA (GaeaTimes.com)- The Nizamuddin area of New Delhi wore a look similar to a battle-field on Wednesday when Muslim protesters clashed with police officials over the demolition of a mosque. The violence in the area of the national capital followed after Delhi Development Authority (DDA) took the initiative to demolish a mosque which was supposedly built on government land and within a span of three hours, the Muslim religious structure was completely dismantled by the Delhi authorities. However, soon after the demolition, violence erupted as angry protesters gathered at the Muslim-dominated area leaving the officials with no option but to resort to lathicharge and use tear gas shells to bring the situation under control.

Police authorities have revealed that the decision to demolish the “Noor Mosque” in the Nizamuddin area was taken to get rid of the encroachment from 6,065 sq yard of land belonging to the government. After the religious structure was demolished, the scenario soon took a drastic turn when protesters started pelting stones at the officials in turn throwing the traffic in the area completely out of gear. According to Delhi police, in the violence that ensued, at least 15 people are known to have sustained injuries while thirty others received minor wounds.

Despite DDA officials reiterating that the Nizamuddin mosque was built on government land, local leaders have alleged that DDA had no right to go ahead with the demolition as the religious structure stood on Wakf land. While talking to reporters, MLA Shoaib Iqbal hailing from the Lok Janshakti Party said that the mosque was on Wakf land and stood there for more than 200 years.

ISLAMABAD - Despite the US endorsement of India's bid for its permanent seat in the UN Security Cou...

Ignite Fest will be based on Indian classical dances

NEW DELHI - The "vocabulary will be completely Indian" and based on Indian classical dances, says le...

NEW DELHI - US President Barack Obama will visit the Humayun's Tomb, a World Heritage site that was ...

NEW DELHI - Barack Obama will visit the Humayun's Tomb here, becoming the first US president to ...