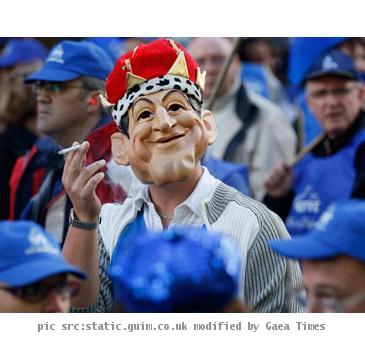 PARIS, FRANCE (GaeaTimes.com)- The French Strike is now threatening to affect the economy and public life as the defiant president Nicolas Sarkozy refuses to bow down to the demand of the protesters. Yesterday over a million people in France took to streets to raise their voice against the proposed pension reform plans supported by the president of the country. The countrywide strike has now started affecting schools and transport in a major way. However, the French government is also showing a strict stance on the agitated employees who have joined the strike. Brice Hortefeux the interior minister warned the agitators that he would send paramilitary police to thwart the vandalism of the rioters who are now setting cars ablaze and attacking the cops in many ares in France.

He warned that the government would resort to every possible means to put an end to the French Strike and the atrocities committed by the participants in the agitation. The last week more than 1400 people have been arrested for such acts as it has been reported. The fuel crisis that was triggered by the rioters is being brought under control. Three depots of Fuel located in Western France have been made operational forcibly.

The government has slammed the employees taking part in the French strike for blocking the fuel. The interior minister said in a statement that the fuel blockade could lead to very serious developments. He also added that the residents have a right to protest a step taken by the government but not by resorting to vandalism and damaging government property.