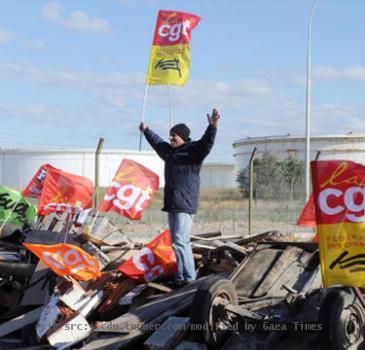 PARIS, FRANCE (GaeaTimes.com)- The French Strike is intensifying with each passing day and threatening to cripple the public life in the country as the cold war between the government and striking employees go on unabated. The strike now has the support of the train and bus drivers, postal workers. Airport employees as well as the truck drivers. The agitating employees in transport sector are dead against the proposal put in by incumbent French President Nicolas Sarkozy. He wants to raise the age for retirement following the example of several other countries in Europe. The residents and tourists in France will bear the brunt as the fuel crisis will mount owing to the strike.

The French Strike is going to enter the eighth day and the authorities are stepping up the safety measures in sensitive areas and provinces in the country to prevent any untoward incident. Reports have poured in already about incidents of agitated troublemakers setting cars on fire and fighting with the cops in some places. The president however is in no mood to bow down to the pressure and has said that there is no question of reverting back. He is of the view that the revision in the age of retirement is essential.

Germany voted in favor of lifting its age for retirement in 2007 and some other countries in Europe are expected to follow suit. The French Strike may now affect the flights badly. Several airports in France including Charles de Gaulle can be impacted by the strike as it is being assumed. The production at some of the leading oil refineries have also come to a standstill.