State Of The Union 2011 To Keep Away Judges 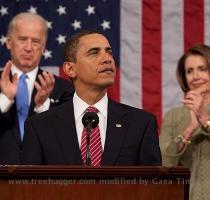 WASHINGTON DC (GaeaTimes.com)- The State of the Union which is to be addressed by the 44th President of the United States Barack Obama is likely to witness the absence of many Supreme Court judges. The State of the Union will be addressed on Tuesday night by the President tonight will see him focusing mainly on the competitiveness and job-chances for the Americans. President Barack Obama, ever since has taken the President’s role has been constantly asserting on the job-competitiveness of the Americans.

Last year after his criticism of the Citizen’s United during the State of the Union speech had offended many of the Supreme Court judges, some of whom do not intend to attend the speech tonight. Judge Samuel Alito and Chief Justice John Roberts are said to be the ones likely to refrain themselves from the address meet. According to sources, Samuel Alito will be leaving for Hawaii, where is scheduled to give lecture to students. As for Chief Justice John Roberts, it is being said that his decision will only become prominent at the final minute. John Roberts, however, has through his disgust for the President’s criticism has made it clear that chances of him staying away from the national event is more.

The judges were offended due to the scorning remarks of President Barack Obama during the last State of the Union speech for he had clearly criticized the Citizen’s United where the judges had denied the involvement of any kind of financial back up from the corporate sector for the election campaigning going on to invalidate the tradition old legacy. They claim that they are highly uncomfortable with the partisanship nature of the event that is going on.

BHOPAL - The central government has awarded Madhya Pradesh for the best implementation of Forest Rig...