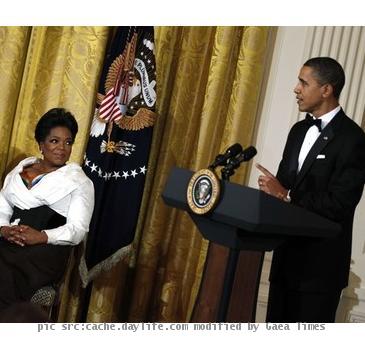 WASHINGTON (GaeaTimes.com) — 12 stitches leading to split lips is what made Barack Obama grapple with the word ‘Superfluous’.

For those of you don’t know how the president was led to these 12 stitches, let me tell you, recently while playing pickup basketball game the day after Thanksgiving Barack Obama was elbowed.

The President was reading a speech on Sunday evening at a White House event for this year’s Kennedy Center honorees from an opinion by legendary Supreme Court Justice Oliver Wendell Holmes.

Well, Mr. Obama finally succeeded, as he always does, and received huge applause from the crowd. The excerpts were somewhat,

President Obama did add a few of his own words like,

The men and women here tonight embody that idea. Tonight it is my honor to offer them the appreciation of a grateful nation.