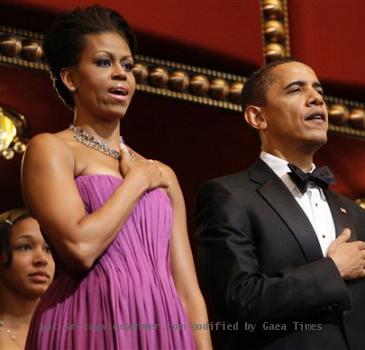 WASHINGTON (GaeaTimes.com) — This year at the Kennedy Honors new things popped up all of a sudden. The president had trouble in pronouncing ‘Superfluous’ with his split lips. But nevertheless he enjoyed a lot.

According to Barack Obama,

This was what he had to say for all the honorees at a reception in the East Room of the White House prior to the awards ceremony. Oh, well this uear among the list some highlights include country-and-western singer-songwriter Merle Haggard; ex-Beatle Paul McCartney; veteran Broadway composer Jerry Herman; dancer and choreographer Bill T. Jones; and television host and actress Oprah Winfrey, a fellow Chicagoan and an early Obama supporter.

As for the the reigning queen of daytime talk, the president kep it sweet and simple,

Michelle and I love Oprah..

Well, Winfrey also seemed to have been moved by the recognition she was given, It feels like you on your very best day, It feels like when every single thing in your life comes together in one moment to say, ‘Wow. That actually happened for me.

Winfrey was also thrilled by president’s words for her, she was found repeating herself,

He said he loved me