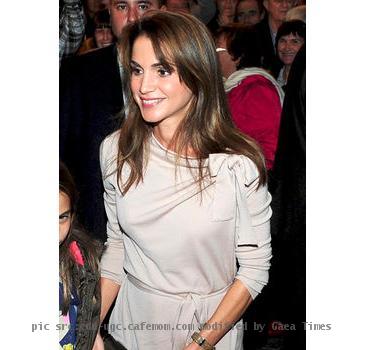 AMMAN, JORDAN (GaeaTimes.com)- Jordan’s Queen Rania had to face the ire of some tribal leaders of the nations earlier this week who accused her of getting involved in the politics as well as “building power centres for her own interests”. The harsh words against King Abdullah II’s wife came to light after a joint statement was released by 36 tribal Jordanian leaders who criticized the queen for her involvement in ‘corruption.’ Since the recent uprisings that have rocked Tunisia and Egypt, the Jordanian king is under immense pressure to bring certain political as well as economic reforms in the country.

The 36 tribes which comprise of around 40 per cent of the population of the country, plays a significant role in stabilizing the government as well as in the politics of the Arab nation. In the statement, the tribal leaders made an appeal to the King Abdullah II to “return to the treasury land and farms given to the Yassin family (of the queen)” while explaining that the land actually belongs to the people of Jordan. Despite the fact that the tribes are always known for their support to the Hashemite monarchy, in the recent public declaration the tribal chiefs have hinted that the throne might be in danger if the king does not curtail Queen Rania’s involvement in the political scenario of the country.

Queen Rania who is of Palestinian origin, is a well-known personality in the international circle and over the years, she has worked for women’s right and education. However, despite her international fame, the Jordanian queen has often faced flak in her own country for her luxurious lifestyle.

LONDON - A 20-year-old Brit model has given up her glittering career to fight Taliban in Afghanista...

LONDON - An Al Qaeda group in Somalia has boasted that it plans to launch several smaller-scale ...

Not only that she looks fabulous and gets to wear so many super clothes, but this girl surely knows ...