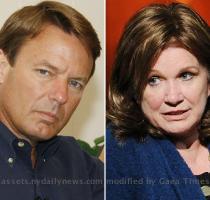 RALEIGH (GaeaTimes.com)- Elizabeth Edwards before her death had left every thing that belonged to her solely for her children. Her will that was recently made public has seized everyone’s attention after it was found that she had left nothing in the name of his former husband. The name of her estranged husband from whom she split in 2010 features nowhere in the legal documents where she has nominated everything in the name of her three children.

Her will was filed in North Carolina’s Orange County. The date cited on the will shows that it was only a few days before her death that Elizabeth Edwards took the decision to make it legal. She passed away on December 7, 2010 due to a fretful breast cancer while the will was formatted on December 1. In her will she has made it clear that every thing ranging from furniture, automobiles, jewelry, to any personal belonging all would be divided amongst her three children Catharine, Emma and Jack. Since Emma and Jack are still not adults, the ex-wife of the former two time US Presidential candidate John Edwards thought it wise to make eldest daughter Catharine as the operator of the will. Twenty eight Catharine by profession is a lawyer.

That Elizabeth Edwards chose to exclude former husband John Edwards from her will makes it evident that till her death she had not been able to forgive him for what he did to her. The couple had split after 32 years of marriage after John Edwards admitted of having an affair with Rielle Hunter, his campaign videographer. The two also have a child outside their marriage.

Elizabeth Hurley Has Fan At Home

LONDON (GaeaTimes.com)- 'Bedazzled' star Elizabeth Hurley has revealed in her recent tweets that...

LONDON - Model-actress Elizabeth Hurley has a fan in her eight-year-old son Damian. His favourite fi...

WALES (GaeaTimes.com)- Congratulatory messages have been pouring in to the royal family of Engla...
Copyright© 2011 The Gaea Times