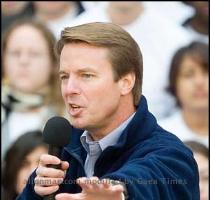 RALEIGH (GaeaTimes.com)- The federal court in Raleigh, North Carolina recently summoned four relatives of a rich donor who had supported the campaign of two time Democratic Presidential candidate John Edwards. A grand jury has been looking into the matter and investigations regarding the funds are going on. John Edwards is being probed by the law for the campaign fund which is believed to have been misused for purposes other than the elections.

According to sources, heiress Rachel “Bunny” Mellon’ son Stacy Lloyd III, his two sons, Stacy Lloyd IV and Thomas Lloyd along with the wife of Thomas Lloyd, Ricki Lloyd were in the court for some to testify in front of the jury. The grand jury proceedings have been strictly kept under the wraps and legal executives are not wiling to say any thing about this case in relation to John Edwards. However, there has been a buzz that a good amount of the fund was invested in the maintenance of John Edward’s mistress Rielle Hunter. John Edwards allegedly had an affair with his staffer Rielle Hunter following which he and his wife Elizabeth Edwards split a few years back. Elizabeth Edwards who has been tormented with an infectious cancer is recently in the news as doctors have announced that she is in the last stage of her life.

Reportedly the money was given to Rielle Hunter to keep her mouth shut. The heiress is said to have given at least a minimum of $495,000 to the group that was backing John Edwards‘ campaign. She even gave paid the campaign directly. It is being said that donor Rachel “Bunny” Mellon had no idea as to how the money would be used. Sources are claiming that the testimony is likely to be of no help.

WASHINGTON - A simple diagnostic tool has been developed by Boston University researchers to qu...

LONDON - A female teaching assistant has been jailed for 16 months after she had sex with two male p...

Elderly people can improve their vision with perceptual training

Album signed by John Lennon for his killer for sale

NEW YORK - An album that John Lennon signed for his killer David Chapman hours before he killed the ...