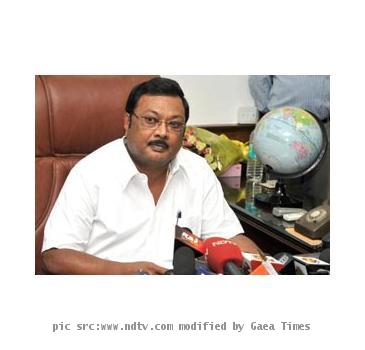 CHENNAI, INDIA (GaeaTimes.com)- MK Alagiri - the son of DMK leader M Karunanidhi has stood by his word and resigned as the Organising Secretary of the party and also quit the post of Chemicals and Fertilizers ministry. He was annoyed with the view expressed by his party over the 2G spectrum scam. The minister was also miffed with the unconditional support given to A Raja, the controversy laden Ex-Telecom Minister by the DMK in recent times. This incident has brought out the war in the DMK core group in the open. He has also demanded that the tainted former telecommunication minister be sacked by his father. The angry minister also said that he will focus on state politics in near future.

The resignation of A Raja made waves in the national media and gave the opposition parties a chance to point out at the UPA government for the scam. It has been reported that the resignation of MK Alagiri is yet to reach the office of the Prime minister. He is also upset with his half sister Kanimozhi. T.R. Baalu a senior party leader of DMK met Sonia Gandhi, the Congress president but he refuted the claim that it had got anything to do with the resignation of MK Alagiri. He told the press ‘It was a courtesy call. I conveyed (party president) M. Karunanidhi’s New Year greetings to the Congress president’.

MK Alagiri has demanded that DMK should distance itself from former tainted minister A Raja and the refusal of the party to do have prompted him to take the stand. The party is yet to make an official statement on this.

KOCHI - The breakaway faction of the Janata Dal-Secular (JD-S) in Kerala has decided to ask the spea...

The Congress must have realised by now that it gave too much leeway to Andimuthu Raja, the former te...

NEW DELHI - Even as the opposition Thursday attacked the prime minister over his "silence" on the 2G...

MADURAI - The Congress-DMK alliance, which seemed to be under strain after the resignation of A. Raj...

CAG should criticise only in public interest: Karunanidhi

Centre yet to take a decision on withdrawal of Central forces from WB: Chidambaram