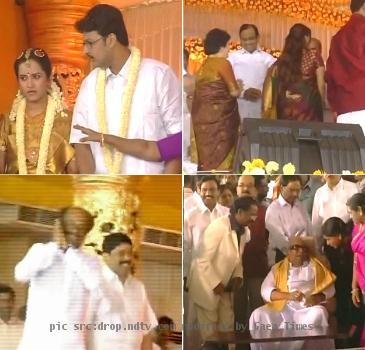 MADURAI, INDIA (GaeaTimes.com)- Tamil Nadu Chief Minister M Karunanidhi’s grandson Dayanidhi Alagiri tied the knot with Chennai girl Anusha in a gala wedding ceremony on Thursday which witnessed the presence of a number of prominent personalities who graced the event to offer their best wishes to the newly-weds. Dayanidhi Alagiri, who is the son of DMK leader M.K. Alagiri tied the knot with Chennai-based lawyer S Seetharaman’s daughter in the grand marriage ceremony.

The gala marriage ceremony that was held on Thursday was preceded by a pre-wedding reception on Wednesday night which also turned out to be a star-studded event with the who’s who of the world of politics as well as entertainment gracing the event to bless the couple. Some of the prominent personalities who attended the wedding ceremony included Home Minister P. Chidambaram, senior Congress leader Pranab Mukherjee, among others. Although Prime Minister Manmohan Singh as well as UPA chairperson Sonia Gandhi were invited to the marriage of M.K. Alagiri’s son, they could not make it to the wedding due to prior commitments. However, both the Congress leader’s sent their greetings to Tamil Nadu Chief Minister M. Karunanidhi on the occasion of his grandson’s wedding while congratulating the couple and wishing them all the very best for their married life.

Apart from the politicians, prominent names from the world of glitz and glamor who made their presence felt in M.K. Alagiri’s son pre-marriage reception and the subsequent wedding includes Kamal Hassan, Madhavan, Surya, Khushboo, Rajnikanth, to name a few. While talking to reporters after attending the wedding, superstar Rajnikanth added that as he has his own grandchildren, he knows how happy and proud the Tamil Nadu Chief Minister must be.