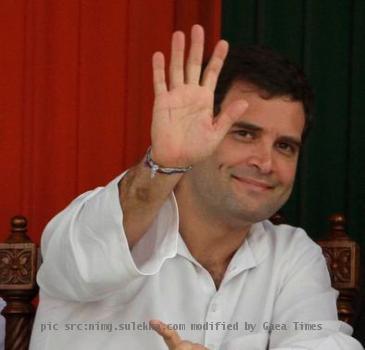 DELHI, INDIA (GaeaTimes.com)- It seems that BJP never gets tired of venting its wrath on the main political party in the ruling UPA government, and Rahul Gandhi seems to be the target of the party most of the times. Noted TV actress and BJP leader Smriti Irani recently came down heavily on Congress and Rahul Gandhi in her speech. She expressed her doubts over the credential of Rahul Gandhi as the future leader of the nation and said that the young Congress leader always keeps mum on key political and national issues. The actress turned politician said “How can you hand over the country’s command to Rahul who keeps quiet on important issues raised in Parliament?”

The BJP Mahila Morcha president said that the CBI raids carried out on the residence of A Raja former Union Telecom Minister and corporate lobbyist Nira Radia are nothing but instances of eyewash. She said that the government is trying to mislead the public on the 2G spectrum scam issue. She said that neither Rahul Gandhi nor key UPA leaders are carrying out their responsibilities on the issue. Smriti Irani also added that the women wing of BJP will arrange rallies and political meetings at various places of the country to protest against the corruption and the attempt of the ruling UPA government to bury the issue under hatchet.

While slamming Rahul Gandhi and UPA chairperson Sonia Gandhi, the BJP leader said that the debacle of Congress in Bihar assembly poll will set the stage for the downfall of Congress. She also lashed at P Chidambaram the Union home minister for rising crime graph of the Indian capital.

GUANGZHOU - India's 16-year-old archery sensation Deepika Kumari could not live up to expectations a...