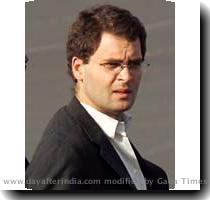 NEW DELHI, INDIA (GaeaTimes.com)- Rahul Gandhi, the general secretary of the Congress party and the son of party President Sonia Gandhi turns 40 today. Although many might presume that Rahul Gandhi’s birthday would be marked by extensive celebrations in the national capital, it is said to be unclear whether the Congress general secretary would be in Delhi today on the occasion. According to reports, Rahul Gandhi is not in the national capital at present and no information is available about where he would be celebrating his birthday.

Despite the fact that information about Rahul Gandhi’s birthday celebration in Delhi has not been forthcoming, it seems that the unit of the Congress party in Uttar Pradesh is keeping no stones unturned to ensure that the 40th birthday of the party’s general secretary is celebrated to the fullest. It has come to light that on Saturday, the state unit of the Congress party intends to take out marches in different districts of the state to celebrate Rahul Gandhi’s birthday. While speaking to reporters on Friday, Rita Bahuguna who happens to be the Congress President of Uttar Pradesh, said that in order to mark the 40th birthday of the party’s general secretary, blood donation camps, social gatherings as well as a number of other events would be organized in various districts of the state.

Rahul Gandhi, who hails from the most illustrious political party of the nation, became the youngest Nehru-Gandhi family member to enter active politics in 2004 when the contested and later on went on to win a seat in the lower house of the Parliament. The young leader is regarded by many, as the new face and future of Indian politics.