Varun Gandhi to Tie the Knot with Yamini Roy Chowdhury 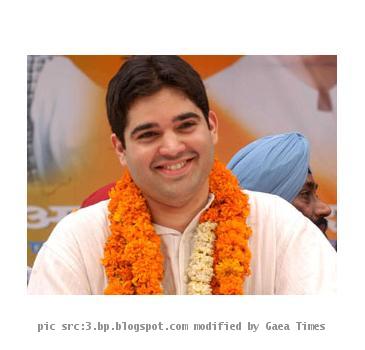 Days are coming for grand celebration in the India’s most illustrious family ‘Gandhi’ family. Varun Gandhi, the young BJP leader and Pilibhit MP is going to tie the knot with a Bengali girl Yamini Roy Chowdhury.

Maneka Gandhi, during her visit to flood affected region of Badaun in Uttar Pradesh has conformed the news. She said that his son’s marriage had been fixed. ” He will marry a girl from West Bengal named Yamini,” she said.

Although she didn’t reveal the date of the wedding, the speculation suggests that it would be take place on December 11.

While talking about the invitees, Varun’s mom named Sonia Gandhi and Rahul Gandhi. In this respect we can recall the wedding ceremony of Priyanka Gandhi with Robert Vadra. Despite of stained relationship among the families Varun attended the ceremony 13 years ago.

Reportedly, Maneka and Yamini’s mother film critic Aruna Vasudev were framed together at a sari store in Varanasi three months back. They were believed to have purchased some traditional Benarasi silks saris and lehengas.

Yamini, who completed her graduation from St. Stephen, Delhi, is a graphic designer. She also studied at Sorbonne University, Paris. She lives in Defense Colony, Delhi.

Varun and Yamini has been friends for the past five years. Varun, who was in the headline for making objectionable remarks against Muslims and Sikhs during the Lok Sabha election campaign last year is still fighting a case in court.