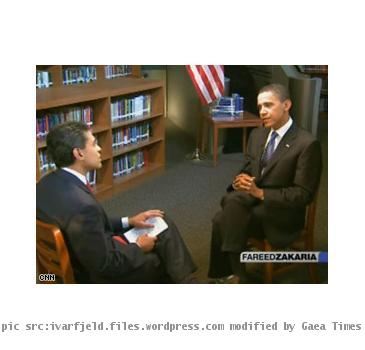 WASHINGTON (GaeaTimes.com) — President Obama settled in for a more fiscally responsible deal with Republicans in an attempt to settle things for good.

CNN show host Fareed Zakaria who happens to be an author and foreign affairs analyst states,

Obama was exactly right to try and make a deal with the Republicans. But it does seem somewhat lopsided in that the Republicans got exactly what they wanted, which makes one wonder whether there was a better negotiating strategy that might have been adopted

The president as we know, got into negotiations with the Republican leaders in Congress regarding a temporary reduction in the payroll tax, extension of unemployment benefits and to get the settlement done quickly he agreed to a number of benefits acceptable to the Republicans.

Fareed Zakaria spoke out to CNN, about his views on the controversial tax-cut bills and the proceeding of events.

CNN: What was your reaction to the decision by the House Democrats not to approve President Obama’s proposal?

Fareed Zakaria: I think, in the end, he’ll get through the broad outline of the deal that he’s struck with the Republicans. I think that there will be some changes, but I don’t think they’ll affect the broad outline. At least that’s my sense right now.

CNN: Stepping back, what do you think of the president’s decision to strike a deal?

Zakaria: I think that he did exactly the right thing in trying to strike a deal. I think his justification for it in his press conference was exactly right, that you have a complex country, a large country with lots of different views, and his own views on every issue do not command a majority. All that said, I’m surprised that he was not able to get a better deal from his point of view.

I am surprised that he was not able to separate out the tax cuts in the way that the Democrats in Congress wanted, which is to say extending the tax cuts for 98% of the people versus the tax cuts for the top 2%, that is people making over $250,000. That would have been a way of achieving a compromise but also doing something that was not as fiscally irresponsible as the current package.

That was the core demand of the Democrats in both the House and the Senate, and I’m just surprised that Obama wasn’t able to get that.

CNN: Do you think there was any way the Republicans were going to agree to let the tax cuts expire on the people who earn more than $250,000?

Zakaria: Well, that’s the question. If you played chicken, who would have blinked? And I don’t know the answer to that, and … you know, you are sitting on the outside, we were not in the room, but it’s puzzling to me that the president didn’t have more leverage. After all, if he had threatened to let all the tax cuts expire, wouldn’t the Republicans have been more upset about the idea of it, right after their great victory in the elections? The first major act that happens is across-the-board tax increases for everyone? They wouldn’t want that to happen, either.

CNN: Do you think the president was focused on making sure the economy was in better shape by 2012, when he is due to run for re-election?

Zakaria: I think the president was focused on trying to jump-start the economy. I think that this is not as political as people make out, because the core stimulus in this package, which is not the tax cuts but the extension of unemployment insurance and the payroll tax or holiday, those expire in 2012, so actually, politically, it is not a great strategy. I think you have to give the president the benefit of the doubt there. I think he was trying to do what he thought was the right thing for the economy. My problem with the entire bill and the approach of both parties is that it seems to basically to try to reignite the consumption bubble that has fueled the American economy for a while now, but that, we know, is fundamentally unsustainable.

CNN: Why is it unsustainable?

Zakaria: Well, if you look at what has been fueling the American economy for the last decade or more, it has been a rise in consumption. American consumers have started spending more and more, going from 62% of GDP to 70% of GDP in consumer spending.

The problem is that this is not happening because of any rise in our incomes; it’s because we are taking out loans, we are borrowing, and it is this expansion of credit that was at the heart of the financial crisis. Now, the solution of both parties is to try in a sense to get that old machine going again. If you look at the tax cuts, if you look at all of these government stimulus measures and if you look at the Federal Reserve pumping money into the economy, the whole effort seems to get people to spend more, to borrow more, but the reality is that’s not a sustainable strategy.

In the long run, what we actually have to be doing is allowing people to get their balance sheets in order, borrow less and move the economy more dramatically toward a focus on investment and the creation of products of various kinds, rather than hoping that if we all just started spending more, borrowing more, perhaps selling each other our houses once again, the American economy would be back on track.

CNN: Does the fact that the president agreed to extend all the tax cuts help the Republicans with their idea of curbing or controlling government with a “starve the beast” mentality?

Zakaria: I think that we have tried that experiment for over 25 years now. Republicans have been able to enact tax cut after tax cut over 25 years and not just at the federal level but at the state level, as well. And the evidence is overwhelmingly clear. Instead of starving the beast, it has not starved the beast; it has not resulted in any significant cuts in government spending anywhere. In fact, instead, what’s happened, we have simply borrowed money to make up the difference so that we have created a massive fiscal crisis for the country at every level of government.

The theory is that this time, after 25 years of having tried this and failed, this time it’ll succeed. Maybe, but this budget compromise shows that nobody wants to do the unpopular things. This budget compromise at some level is a kind of Santa Claus compromise, right? I mean, the Republicans got what they wanted, which was tax cuts; the Democrats got what they wanted, which was extension of unemployment insurance and a few other things like that, but what about dealing with spending?

Well, later. That’s always pushed off to later. The system seems designed to do the popular stuff now and to hope that at some point in the future we’ll do the unpopular stuff on the dubious theory that Congress two years from now is going to have the political courage it lacks today.

CNN: So you don’t sound like you have much optimism about deficit reduction in the new Congress.

Zakaria: Well, we’ve had an interesting experiment right over the last 10 days. We had a perfectly reasonable set of proposals put out by the Simpson-Bowles budget commission, and you have this tax deal. The Simpson-Bowles commission, which inflicts some short-term pain for long-term gain, is basically dead in the water. The budget compromise, which as I said basically gives everybody what they want and blows a $900 million hole in the budget, is more likely to pass. What does that tell us about our ability to get serious about fiscal sanity?

OP-ED by Vice President Jow Biden in the New York Times: "What we must do for Iraq now"