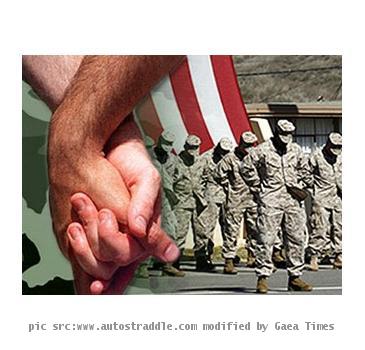 WASHINGTON (GaeaTimes.com) — Gay right groups have decided upon rallying their views near the U.S. Capitol with new hope.

According to the the Servicemembers Legal Defense Network,

The Senate on Thursday rejected a Democratic bid to open debate on repealing the policy. Thus the slightest of hopes for the bill being passed in the current congressional session has been brutally assassinated. But the groups haven’t lost faith and are willing to standby their cause.

Plannings are on regarding raising the issue again in a separate piece of legislation. The Democratic caucus has 58 members need atleast two more candidates joining there cause to claim a majority count of 60.

I am perplexed and frustrated that this important bill is going to become a victim of politics. We should be able to do better.

In a statement President Barack Obama said that he was “extremely disappointed that yet another filibuster has prevented the Senate from moving forward” with the defense authorization measure that includes the repeal provision.

While today’s vote was disappointing, it must not be the end of our efforts, I urge the Senate to revisit these important issues during the lame-duck session.

NEW DELHI - Transgenders are at a higher risk of contracting HIV infection, said a UN report on AIDS...

NEW DELHI - India has extended its ban on the Liberation Tigers of Tamil Eelam (LTTE) as it fears th...

BRISBANE - England off-spinner Graeme Swann has said that he is absolutely clear and deadly s...

LONDON - A study has suggested that Internet chatrooms and social networking sites are to be blamed ...
Copyright© 2010 The Gaea Times