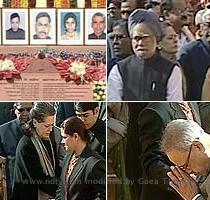 NEW DELHI, INDIA (GaeaTimes.com)- Nine years back on December 13, nine people lost their lives in the attack which was launched by terrorists on the Parliament House of India. The incident taking place in New Delhi had not only thrown the political figures in a state of trauma but to the entire nation as well. Today political figures including the Prime Minister of India Dr. Manmohan Singh along with the Vice President Mohammad Hamid Ansari paid homage to all those who had lost their lives out in the dreadful incident.

Others who joined to pay the tribute are Lok Sabha Speaker Meira Kumar, Sonia Gandhi, President of All India Congress, opposition leaders Sushma Swaraj, Arun Jaitley, Lal Krishna Advani any many more. They ministers were seen offering floral tribute to these martyrs and prayed for their prayed for their souls to rest in peace. The incident on December 13th had taken the nation by storm bringing the two countries of India and Pakistan almost to the state of a war. The terrorists had shaken the Parliament when they started firing openly in the campus without making the slightest discrimination. Nine people were shot dead instantly on the spot as a result of the attack. Pakistan however never accepted the charges.

Among the deceased Indians were five personnels of the Delhi Police, a woman trooper of the Central Reserve Police Force , two parliament guards, a ward staff and a gardener. A journalist who was injured on the spot later on passed away. Afzal Guru, one of the accused terrorists in the Parliament attack has been awarded death sentence, but it is pending as a result of his mercy petition.

NEW DELHI - Paying homage to those who lost their lives in the east Delhi building collapse last wee...

NEW DELHI - The Delhi assembly witnessed uproarious scenes Tuesday on the opening day of the winter ...

OAKLAND (GaeaTimes.com) For the people who had died in the Jonestown tragedy, a memorial service...

NEW DELHI - The Rajya Sabha Thursday mourned the deaths of 69 people in the building collapse in eas...

Zeffirelli's 'Romeo and Juliet' to find resonance in 'Guzaarish'

LONDON - The Jackson brothers are set to launch their own clothing line, which will pay homage to th...
Copyright© 2010 The Gaea Times