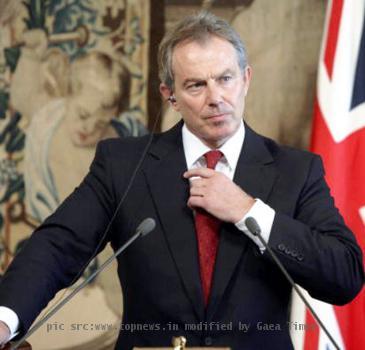 LONDON (GaeaTimes.com) — Former British Prime Minister Tony Blair has decided to cancel his book signing event on Wednesday at Piccadily. His autobiography which has already broke all the previous sales records, has also sparked various controversies. Hence, in fear of a violent protest, Tony Blair has taken the decision to step down from the signing event.

In the earlier book signing event at Dublin, anti-war protester showered the posters with eggs and shoes. Although Blair was not hit by any missiles, the former prime minister was heckled and jeered by the crowd. So, he is expecting another large crowd of protesters in from of Waterstone’s store, where his next book signing event is scheduled.

Blair has said that the police was very helpful and were ready to do anything. But he does not want them to commit resources unnecessarily.

Earlier most of the critics wanted to keep Blair’s autobiography in the crime section. This has induced a great anticipation amongst the crowd. Heavy discounting helped early sales of Mr Blair’s book. It was reduced by 50 per cent to 12.50 at Waterstone’s, Amazon and WHSmith.