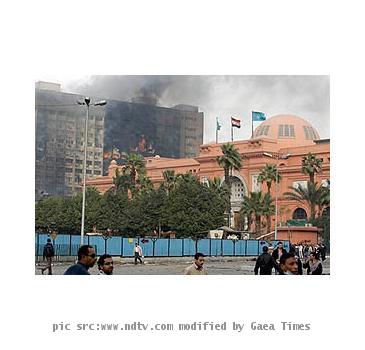 CAIRO, EGYPT (GaeaTimes.com)- Amidst the political turmoil in extensive parts of Egypt with anti-government protests throwing normal life completely out of gear, government from nations across the world are doing their best to evacuate citizens from the trouble-torn country. As the crisis in Egypt further deepens without showing much sign of slowing down, governments in countries such as China, Australia, United States, Switzerland, among others are taking the necessary steps to ensure that the nationals are brought to safety in their homeland. The Indian government on Sunday had sent a special Air India flight to Cairo to bring back the stranded tourists and as many as 300 Indians were airlifted from the Egyptian capital to ensure their safety.

The special Air India flight was arranged by the Indian government after large number of Indian national stranded in the wake of the Egypt crisis made an appeal to the government to bring them back to their homeland. At the same time, officials have revealed that in the next few days, more such special flights would be plying between the Egyptian capital and India to evacuate the other tourists who are stranded in the trouble-torn nation.

Meanwhile, China has also confirmed that it would be sending two flights to Cairo on Monday as the crisis in Egypt continues unabated. Flights from Air China and Hainan Airlines are expected to bring back as many as 500 Chinese national who have been stranded in the Cairo airport for the last few days. A statement that was issued by the Foreign Ministry of China reads that Chinese government hopes that normalcy and peace would be soon restored in Egypt.