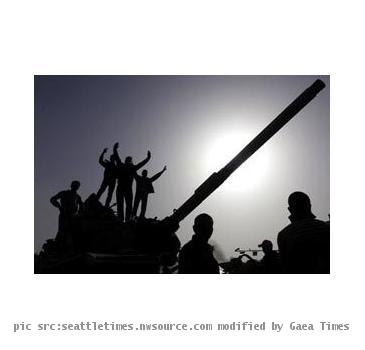 CAIRO, EGYPT (GaeaTimes.com)- The political crisis in Egypt is reaching a new level as it seems from the development. The effort of the Hosni Mubarak government to thwart the protesters from communicating by blacking out web services and mobile telephony has not succeeded much. The army has been deployed in many sensitive areas in the trouble torn country but the protesters show no sign of receding. The incidents of looting are increasing and the protesters demanding the resignation of the president are ransacking government property and police vehicle. The ally of Egypt, USA is treading cautiously over the issue and President Barack Obama has said that violence should be shunned by the protesters. He also urged the ruling government to adopt reform measures at the earliest.

After violence clashes took place between the cops and protesters leaving many injured and at least 100 dead, incidents of hooligans roaming free in the capital surfaced. The government is not in a mood to relent to the pressure and violence and that explains why the retreating cops were replaced by the Egyptian army. The army however has not acted in a high handed manner so far. It remains to be seen how the army reacts to the crisis and the fate of the government will depend on it. The president has said he will not step down but will sack the cabinet accused of deep rooted corruption.

The president has appointed Omar Suleiman as the Vice president in Egypt amidst the crisis faced by his government. The success of the opposition party will depend on how well it can organize the anti government forces under one umbrella.