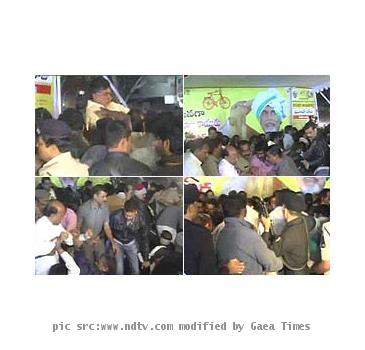 HYDERABAD, INDIA (GaeaTimes.com)- Telugu Desam Party supremo N. Chandrababu Naidu, who has been on a hunger strike for the last few days in a bid to ensure compensation for farmers, was taken into custody on the wee hours of Monday morning. The Hyderabad police officials promptly shifted the former Chief Minister to a medical facility soon after arresting him as his blood sugar is said to have dipped to alarming levels, leaving the authorities with no other option but to take stringent action to bring the situation under control. N. Chandrababu Naidu has been admitted to the Nizam’s Institute of Medical Sciences in Hyderabad although the TDP leader is said to have continuing his fast in the medical facility.

According to Hyderabad police authorities, N. Chandrababu Naidu has been booked under Section 309 of Indian Penal Code which accounts for attempt to commit suicide while the rest of the TDP leaders are facing a case under Section 353 IPC which pertains to preventing a public servant from discharging his duties. As the officials attempted to arrest the former Chief Minister, a scuffle broke out between the cops and the TDP workers which supposedly left many of them injured. It has been reported that N. Chandrababu Naidu’s son MLC YVB Rajendra Prasad also sustained injuries in the altercation between the cops and the TDP supporters who resisted the arrest of their leader.

N. Chandrababu Naidu has been on a fast from Friday to showcase his protest against for the ‘insufficient relief’ that the government has provided to the farmers of the state who have suffered significant damage to their crops in the recent rains.

How airborne influenza may spread