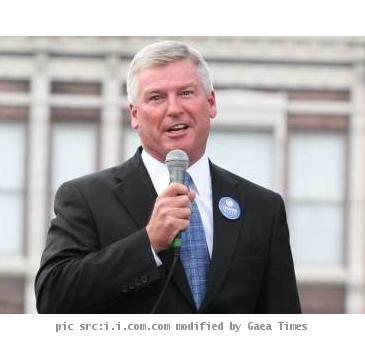 ILLINOIS (GaeaTimes.com)- Timothy J. Davlin who is preferably known as Tim Davlin’s body was found in his home on Tuesday after police responded to 911 call as he failed to show up in court. The mayor was scheduled to appear on an hearing in a probate case which involves his late cousin’s estate. The Democratic mayor was 53 year old.

Police Chief Robert Williams refused to divulge any details about how Tim Davlin passed away. However, the local media reported that the mayor died on an apparent self-inflicted gunshot wound. However, the law enforcement officials did not comment anything about this matter. Springfield Alderman Frank Kunz is has been sworn as the acting mayor immediately after the unfortunate news of Tim Davlin’s demise was announced. State Police Acting Director Jonathon Monken said that the police has opened a death investigation and they cannot rule out on any possibilities regarding it. He said that when the law enforcement officials are on a death investigation they do not disclose any details before they are 100 percent sure about it. However, he said that an autopsy has been scheduled on Monday and after that the police may release information if needed.

Dick Durbin, US Senator said that Tim Davlin’s work always reflected his dedication towards his hometown. State Senator Larry Bomke said that he met the mayor two weeks ago and he found no indication which showed that he was in any tension. He said that it was a sad day in Springfield. Larry Bomke remembered the mayor by saying that Tim Davlin had charismatic smile. However, earlier this year the late mayor announced that he would not run for election this year.

LONDON - An abundance of moles can be a matter of embarrassment to many, but scientists say people ...

SYDNEY - Australian off-spinner Jason Krejza has quashed speculation that it was because he had f...

Susan Sarandon is 'comfortable in her saggy skin'

MELBOURNE - Susan Sarandon has revealed that she is happy being 64, even if her skin sags. "I wouldn...
Copyright© 2010 The Gaea Times