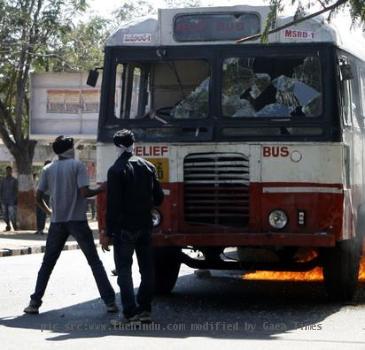 HYDERABAD, INDIA (GaeaTimes.com)- Hyderabad’s Osmania University which is often considered to be the hot-bed of the Telangana agitation, witnessed extensive violence on Thursday just after the details about the Srikrishna Committee report emerged. Students protesting the Srikrishna Committee report clashed with the forces that were deployed at the university campus anticipating trouble following the revelation of the report. According to reports, around six students have sustained injuries in the clash with the paramilitary forces while a senior police officer is also reported to have suffered major injuries in the scuffle.

Soon after the details of the Srikrishna Committee report were made public on Thursday, tension started brewing in the university campus at Hyderabad as agitating students gathered to protest against the report. Few students armed with sticks entered the campus from the Western gate and things took a turn for the worse when the students were restricted from leaving the campus by the paramilitary forces. The agitated mob started pelting stones while a bus near the university campus was also set ablaze forcing the police officials to throw tear gas shells in a bid to disperse the crowd. In order to bring the situation under control, the vehicular traffic near Osmania University was diverted while the entire campus was sealed off to avoid any untoward incident.

Considering the fact that the Centre was scheduled to make public details of the Srikrishna Committee report, increasingly large number of paramilitary forces were deployed in and around Hyderabad’s Osmania University. The injured students were immediately rushed to a hospital while a senior police officials emphasized that they were not wounded by the firing of tear gas shells.